Am I the brother of the lost son?

Yesterday I preached about the story of the prodigal son from Luke 15. Two days ago when I wrote on facebook that I will speak about that someone said (I think my finish friend Laura) that I should post it on my blog so others can enjoy it.
A short version of what I said would go something like this... 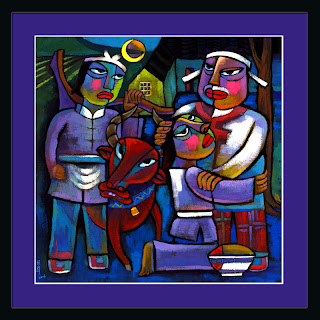 Almost everyone that reads the Bible or has read it at least ones knows the story of the Prodigal Son. How a father has two sons and the younger one asks for his part of the inheritance, he gets it and then goes and spends it. After some time he is hungry, lonely and devastated and decides to go back to his fathers house. He comes back wanting to be just a slave but the father receives him as his son and puts on him new clothes, he gives him a ring which means that he restores his sonship and throws a big party (with lots of meat).
The older son, who has been working on the field, coming back home hears the joyful sounds and is confused. He is informed that his father is throwing a party because his brother is back. Then he gets angry and doesn't want to join the party. His father comes to him and asks him what's the matter. The older son says that he is working like crazy all the time and he never got a treatment like this. Then the father says something very important, which is crucial to our story. He says, "My son, you are together with me all the time and everything I have is yours".
First, the older brother thought that the father was not fair. That he was not treating them equally. But if we think little bit deeper and if we compare the father with the Father God (something which is obvious in this story), then we will come to the conclusion that God's grace is not fair, that God's love is not fair cause it gives us generously something that we don't deserve. So if we have been given grace and love we shouldn't be angry when that same love and grace are extended to other people. Something which is not easy cause I felt for the older brother many times when I would read the story. :)
Second, he said that he is working like crazy and that he never did anything wrong towards his father. We have a picture of a obedient, hard-working, respectful, good guy. And that is ok. It's great to be someone like that. But his problem was his picture of his father. He lived in the same house with his dad but he still saw him as a slave master. (But his dad was definitely not a slave master and a controlling person cause when the younger son asked for his inheritance he didn't say no which speaks something about him). 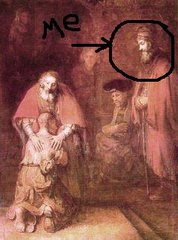 My point is this. The way we see God will determine the way we will live. If we see him as a slave master we will always unconsciously try to work hard to please him. We will think that we suffer and work hard for him, never asking for a "party", trying to be nice people, always positive and ready to help. We can do all those things and still not be happy and fulfilled. When we understand that God takes pleasure in us even before we do anything for him then we are free to enjoy God and enjoy life. (Even before Jesus did a single miracle the Lord said, "This is my beloved Son and I really like him"). I think that in that "everything I have is yours" there is not only a material provision but a quality of life, a life of freedom and joyous participation.
One question that we can all ask ourselves is this, "Do I enjoy life? Am I excited for being alive and serving God?"
I hope that this makes sense and I pray that everyone of us will understand that "all I have is yours". Amen.
p.s. While looking for some photos to put with the post I found this wonderful poem called The Second Prodigal.

He was lost too,

although he could not see it,

for he had stayed at home, was

Trying all the time

he put in long hours,

lost himself in toil

but somehow he didn't know

I longed for him

He was as lost as his brother

so consumed with doing,

...and I am still waiting

Do you know who wrote that poem, "The Second Prodigal?"