Is God a banker?

We read in the Old Testament that God created a nation that was supposed to be different from other nations and be his representative on the Earth. Part of the plan for that nation was to give them laws and regulations through which they should live and there is nothing unusual in that, every nation had laws. What is interesting and unusual is the countercultural nature of those laws.

For example, God told them that every seventh year they should cancel the debts of the debtors, let the captives go free, not glean the fruits of the harvest so the poor can eat and so on. Basically God wanted everyone to be provided for. Not the rich to get richer and the poor to get poorer. If that was ever worked out practically it's another question.

Also, all through the Bible God speaks against usury, taking financial advantage of those who are in bad situation and need to borrow money, meaning giving them money that needs to be payed back with interest.

Christians would say that some jobs are not suited for those who follow Jesus. Let's say that christians should not work in sex-shops, casinos, strip-clubs, and that's ok. But what about banks? When we hear that someone works in a bank do we see him as an achieving person, a person with a good job, or a person who serves the spirit of money and greed? I'm not giving any conclusions here, I'm just asking.
Posted by Urban Mystic at 8:23 PM No comments:

On creativity: David Eugene Vs. Francis of Asissi 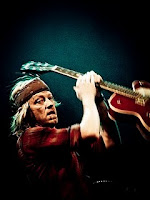 Listening to David Eugene's band Wovenhand and his previous band 16 Horsepower, you can not but notice that they are pretty unique (in my opinion), if we can talk about something being possibly unique under the sun. I think they managed to find their sound and be recognized among the critics and the fans as one of the founders of the gothic americana style. My impression is he doesn't try to make music just to please those who listen to it, but create something that comes out deep from his soul. His faith in God is definitely an inspiration and influence.

Recently, during an international gathering I attended, one canadian guy commented something about St. Francis of Assisi. He said that when people tried to judge his works they couldn't trace them to any previous source of inspiration like artists or writers that worked before him. He was unique in his own way. He was also considered as the forerunner of the Renaissance, which is no small thing. About his inspiration being found in God there is no need to talk.

Of course we are all influenced by the things around us and it's hard to say that someone is completely unique and that creates something which no one has seen before. That's not the point. I think that there is something when you just want to create to glorify God and you are free from the pressure to impress people. It's like the creativity (that comes from the Creator himself) can easily flow through you. I think it's a real challenge to spend time with God and let him be the primary source of our inspiration and not the opinions of others. True creativity is found in your real self, your real self that only God can reveal to you.

Posted by Urban Mystic at 7:32 PM No comments: