"The Sound And The Fury" by William Faulkner 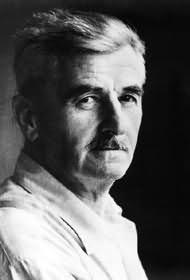 I almost never write on my blog about books that I have read. I remember that the last time I did that was after reading Aleksandr Solzhenitsyn’s “In The First Circle”, a wonderfully written novel. This time I want to write about a book by an American author called William Faulkner, a nobel-winning author writing mainly about the normal people of America's south. The first of his books that I read was “As I Lay Dying” a book telling a story of the death of a woman and the process in which the family tries to take her body to another town to be buried. The whole book is written through a mix of narratives spoken by different members of the family and friends. The whole story developes through the eyes of each of the speakers. Really well thought and well written.

This time I want to write few words about Faulkner’s fourth novel called “The Sound and The Fury” written before “As I lay dying”. It is probably one of the most complex novels in literature and is mostly written in the “stream of consciousness” style mostly used or you can say even invented by James Joyce. Basically, the book doesn’t tell a linear story but describes the dissolution of an aristocratic southern family through four narrators.

The book is divided in four parts, each narrated by a different member of the family (3 brothers), except the last part which is narrated by a third person omniscient point of view.

The first part is written by Benjy, a retarded autistic son in the family, writing which is characterized by short and simple sentences. His part happenes in one day but what is especially hard to follow and confusing is that the story goes back to three parts of his life, all the time shifting swiftly from when he was a little child to the present when he is in his thirties and then when he was a teenager. 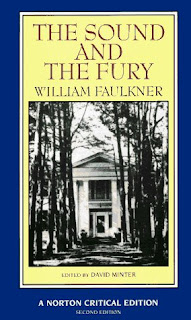 The second part is written by his brother called Quentin, a young man studying at Harvard who commits suicide at the end. He is the hope of the family, obsessed with the dignity and chastity of his beloved sister who ends up pregnant, left by the man and running away and marrying someone else. His inner struggle leads him up to drowning in to a river. His part is also hard to follow as he jumps back and forth between events from the past and the present day.

The third part is written by Jason, Benjy’s and Quentin’s brother, a hard working, “in your face”, greedy and cynical man. He is the only son which their hypochondriac mom loves and who takes care of the family after his sister runs away and his brother commits suicide. As part of the family we also see Quentina, the child that his sister Caddy has left and who now is a seventeen year old girl. Jason misuses and steals the money that Caddy is sending for her daughter thus profiting from her predicament.

The fourth and the last part is focusing mainly on Dilsey, a black woman among the servants, responsible for running the household. Her grandson Luster looks after Benjy, the retarded son. In the end of the story, we see Quentina finding all the checks that her mom has sent, stealing them from her uncle Jason’s room and running away with a guy from the traveling circus.

What makes this book so complex and good is Faulkner’s mastery to get behind a character and portray it so authentically. All four narrations happen in four single and separate days. Benjy’s, Jason’s and Dilsey’s parts happen in 3 consequent days in 1928 and Quentin’s part happenes in 1910. Through 4 days and a lot of going back and forth Faulkner is wonderfully weaving a story in a way in which only few writers have been able to do. That is probably why this book has been studied and analyzed so much by scholars and is one very fine piece of literature.