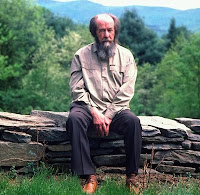 I heard the name of Aleksandr Solzhenitsyn few years ago but I never had the chance (or maybe the interest) to read some of his works. After an increased interest to learn more about the Soviet regime and Stalinism, I couldn't ask for better teacher than him. First I read his book called "In The First Circle" which is a book that talks about the life in one of the labor camps, or better, in one of the institutions where the prisoners are scientists and intellectuals and they work in the field of science while serving their sentence.

My point is not to comment about the book (which is great) or retell it, but about the way he writes about such a serious and painful subject. What struck me is that there is not a judging and condemning tone in his writing. No, he is writing with a hidden irony and sarcasm that you don't see and on the surface he just describes the lives and the backgrounds of the prisoners, but inside there is something happening in you when you read that. You are hit by the reality that they serve their 10 or 25 years (mostly for offenses they "intended" to commit) knowing that at any moment they could get 10 or 25 more and spend their whole life in prison. I guess that's the mastery of his writing which I really admire.

After that I read his first novel which first drew the attention of the public called "One Day In The Life Of Ivan Denisovich" which is much shorter and not so complex. And again, when I read the book I felt that there is nothing special about it but when I finished it, it hit me. The reality of the life in the labor camps. Here are the closing lines of that book.

He covered his head with the skimpy, grubby blanket and stopped listening to the zeks from the other half crowding in between the bunks to be counted.

Shukhov felt pleased with life as he went to sleep. A lot of good things had happened that day. He hadn't been thrown in the hole. The gang hadn't been dragged off to Sotsgorodok. He'd swiped the extra gruel at dinnertime. The foreman had got a good rate for the job. He'd enjoyed working on the wall. He hadn't been caught with the blade at the search point. He'd earned a bit from Tsezar that evening. And he'd bought his tobacco.

The end of an unclouded day. Almost a happy one. Just one of the 3,653 days of his sentence, from bell to bell.

The extra three were for leap years.
Posted by Urban Mystic at 8:43 PM

Yes, I thought the same.