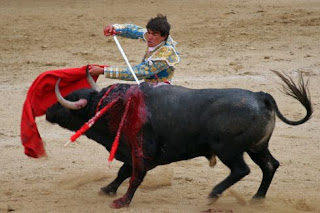 The other day I saw couple of photos of a korida and the bull bleeding and then afterwards being dragged out of the arena dead. I'm not someone who is very loud about animal rights and stuff but seeing this is kind of upsetting. All the people around watching and the poor animal being killed. I heard some time ago that before they let the bull go out into the arena they stab him so he starts bleeding and as the fight progresses he becomes weaker and weaker and in the end he can be killed easier. But that is not a fair fight. (Some time ago I saw on the news a bull jumping in the crowd and hurting a bunch of people. I know it's wrong but something in me said "Yes! Do it!") So, I join all those who are against this kind of entertainment.

But as I walked on the street few days ago a thought came to me. How different this is from killing the same kind of animal in the factory and then eat it as a hamburger or a steak? I will not give an answer, I'm just asking.
Posted by Urban Mystic at 8:22 PM