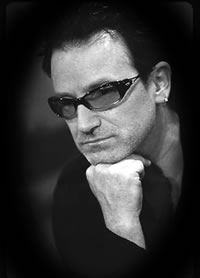 These days I'm really enjoying reading a book called "Bono on Bono" which is not a typical biography but a series of conversations that he had with a friend of his who is a french journalist. I thought it would be interesting to post small bits of the book.

Correct. But you've also never seen a skeptic or an atheist smash himself to pieces in order to kill as many people as possible. I mean, atheists would organize concentration camps or would plan collective starvation, but this kind of terror we are dealing with now is of a spiritual nature. You can't hide from that.

It's true. Yeah, smashing other people to pieces doesn't need the same conviction. Most terrorist want to change the material world. Well, add eternity to that, and people can go a lot further to pursue their ends. It's a big prize, isn't it, eternity? It's not a two-term presidency. (laughs) But of course, this is always a corruption of some holy thesis, whether it's the Koran or the Bible. My understanding of the Scriptures has been made simple by the person of Christ. Christ teaches that God is love. What does that mean? What it means for me: a study of the life of Christ. Love here describes itself as a child born in straw poverty, the most vulnerable situation of all, without honor. I don't let my religious world get too complicated. I just kind of go: Well, I think I know who God is. God is love, and as much as I respond in allowing myself to be transformed by that love and acting in that love, that's my religion. Where things get complicated for me, is when I try to live this love. Now, that's not so easy.

What about the God of the Old Testament? He wasn't so "peace and love."

There's nothing hippie about my picture of Christ. The Gospels paint a picture of a very demanding, sometimes divisive love, but love it is. I accept the Old Testament as more of an action movie: blood, car chases, evacuations, a lot of special effects, seas dividing, mass murder, adultery. The children of God are running amok, wayward. Maybe that's why they're so relatable. But the way we would see it, those of us who are trying to figure out our Christian conundrum, is that the God of the Old Testament is like the journey from stern father to friend. When you're a child, you need clear directions and some strict rules. But with Christ, we have access in a one-to-one relationship, for as in the Old Testament, it was more one of worship and awe, a vertical relationship. The New Testament, on the other hand, we look across at a Jesus who looks familiar, horizontal. The combination is what makes the Cross.
Posted by Urban Mystic at 6:35 PM

hello there!
nice quotes, thanks!

Hi people
I do not know what to give for Christmas of the to friends, advise something ....

Hello. Good day
Who listens to what music?
I Love songs Justin Timberlake and Paris Hilton

Hello. Prompt how to get acquainted with the girl it to me to like. But does not know about it
I have read through one history
Each of you has your personal story; it is your history. Keeping a diary or writing your feelings in a special notebook is a wonderful way to learn how to think and write about who you are -- to develop your own identity and voice.

People of all ages are able to do this. Your own history is special because of your circumstances: your cultural, racial, religious or ethnic background. Your story is also part of human history, a part of the story of the dignity and worth of all human beings. By putting opinions and thoughts into words, you, too, can give voice to your inner self and strivings.

A long entry by Anne Frank on April 5, 1944, written after more than a year and a half of hiding from the Nazis, describes the range of emotions 14-year-old Anne is experiencing:

". . . but the moment I was alone I knew I was going to cry my eyes out. I slid to the floor in my nightgown and began by saying my prayers, very fervently. Then I drew my knees to my chest, lay my head on my arms and cried, all huddled up on the bare floor. A loud sob brought me back down to earth, and I choked back my tears, since I didn't want anyone next door to hear me . . .

"And now it's really over. I finally realized that I must do my school work to keep from being ignorant, to get on in life, to become a journalist, because that's what I want! I know I can write. A few of my stories are good, my descriptions of the Secret Annex are humorous, much of my diary is vivid and alive, but . . . it remains to be seen whether I really have talent . . .

"When I write I can shake off all my cares. My sorrow disappears, my spirits are revived! But, and that's a big question, will I ever be able to write something great, will I ever become a journalist or a writer? I hope so, oh, I hope so very much, because writing allows me to record everything, all my thoughts, ideals and fantasies.

"I haven't worked on Cady's Life for ages. In my mind I've worked out exactly what happens next, but the story doesn't seem to be coming along very well. I might never finish it, and it'll wind up in the wastepaper basket or the stove. That's a horrible thought, but then I say to myself, "At the age of 14 and with so little experience, you can't write about philosophy.' So onward and upward, with renewed spirits. It'll all work out, because I'm determined to write! Yours, Anne M. Frank

For those of you interested in reading some of Anne Frank's first stories and essays, including a version of Cady's Life, see Tales From the Secret Annex (Doubleday, 1996). Next: Reviewing and revising your writing