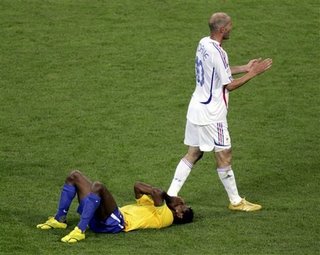 Ok, we are getting closer to the end of the world cup. First Germany-Argentina: they both fought to the end and Germany going further is ok cause they are really good. I think they are the only team that played constantly good from the first match till now. I'm sad for Argentina. This was a match for a semifinal. I didn't watch Italy-Ukraine but what can I say about Italy. Nothing! Portugal-England: England played better without that jerk Rooney. Portugal is the surprise and Scolari is a proof of what a good coach can do. He is really good. Brazil-France: Brazil entered this world cup as total favourites which is not good psychologically. They were under a lot of pressure. On this match France played much better and deserved the victory. Zidan proved that he is an football artist. What I like is that those who are puffed up and are expected to be the best are going home. Neither England nor Brazil deserved a final.
Now we have Germany-Italy and France-Portugal. Most of the predictions are Germany-France in the final with Germany winning. I would not be surprised but I would say in that case: Come on France!
Posted by Urban Mystic at 12:57 PM

zidane played amazing!! just check this video if u need a proof:
http://www.youtube.com/watch?v=XlZaIdrK_b4&feature=Discussed&page=1&t=t&f=b

seeing this, I hope for a germany-france final. I know, I am from germany myself, but if italy wins one more match I can't bear it. how they kick australia out was just unfair.

hei-I come to your blog via Leif Ivar´s- and I read a little here and there.And I just wanted to say as Markus said:"Zidane played amazing". I really wanted France to win the World Championship again...but it didn t turn this way.
Anyway- have a nice day -

Wonderful and informative web site. I used information from that site its great. » » »