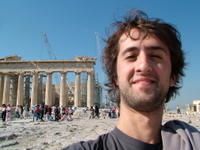 Last week I was in Greece and for the first time visited Athens. Pretty big city...actually too big for me...but very nice also. And it was great driving by the coast from Thessaloniki down to Athens. They say it is something like 5 million people living there. And very international also.
Well, one of the things I really liked is visiting the Acropolis and the Areopagus where St. Paul preached to the Athenians. This is what the bible says in Acts of the apostles 17 (the Message)

"The longer Paul waited in Athens for Silas and Timothy, the angrier he got-all this idols! The city was a junkyard of idols. He discussed it with the Jews and other likeminded people at their meeting place. And every day he went out on the streets and talked with anyone who happened along. He got to know some of the Epicurean and Stoic intellectuals pretty well through these conversations. Some of them dismissed him with sarcasm: "What an airhead!" But others, listening to him go on about Jesus and the ressurection, were intrigued: "That's a new slant on the gods. Tell us more."

"These people got together and asked him to make a public presentation over at the Areopagus, where things were a little quiter...So Paul took his stand in the open space at the Areopagus and laid it out for them..."

"At the phrase "raising him from the dead," the listeners split: Some laughed at him and walked off making jokes...but there were still others, it turned out, who were convinced then and there, and stuck with Paul."

It's pretty much the same today. Some laugh and mock and some believe and are saved. For those who believe IT'S WORTH IT!

"I am not ashamed of the Gospel, because it is the power of God for salvation for those who believe." (Saint Paul)
Posted by Urban Mystic at 8:12 AM

Want more clicks to your Adsense Ads on your Blog?

Then you have to check out my blog. I have found a FREE and Legitimate way that will increase your earnings.

Come Check us out. How to Boost Your AdSense Revenue

Anonymous said...
This comment has been removed by a blog administrator.
8:21 AM